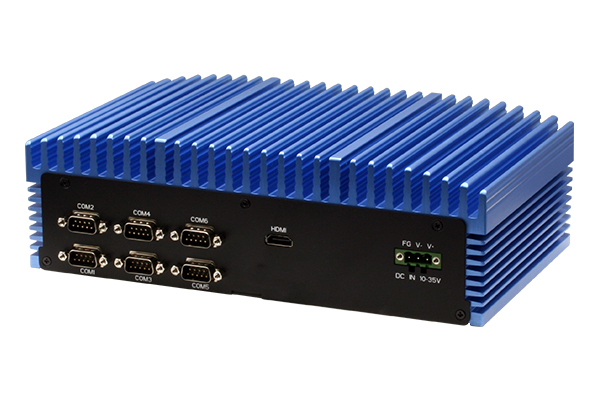 The Boxer-6641 is one such “rugged” computer, designed to be utilized in adverse operating conditions like high temperature, high humidity, and even physical vibrations. Here is a breakdown of its principal features and applications.

Computer processors are constantly evolving. With the 11th Gen Intel processors already entering the market, some might consider an 8th Gen chip to be outdated.

But the fact is that for most common applications, you do not really need the performance boost. Unless your embedded systems are meant to crunch complex numbers for AI algorithms, an 8th Gen processor is going to be more than enough.

This line of processors has demonstrated competence in applications like industrial automation, commercial machines, and many other demanding scenarios. It is well suited for most embedded computing tasks.

When it comes to the RAM, the Boxer-6641 wins in both speed and capacity.

This is because this rugged computer supports DDR4 memory, preferred for its high access speeds that allow applications to run without any lag. The embedded system also supports memory up to 64 GB, removing any possibility of memory limitations.

Embedded computers rarely have the luxury of being housed in well-sheltered locations. It is more likely to find these systems deployed in unusual locations both indoors and outdoors.

Whether deployed alongside industrial equipment or in a shopfront, physical impacts are a given. And while normal computers don’t do well with such shocks, the Boxer-6641 is built to be vibration resistant.

You can use this PC in all kinds of exposed environments without fear of any system failure due to the vibration of the chassis.

Almost all computers use a fan for cooling the processor, and almost all of those fans cause issues. Not only do fans create noise and draw more power, but are prone to failures as well. They get clogged by dust, requiring routine maintenance just to function properly.

This is why rugged computers like the Boxer-6641 use fanless cooling systems. By eliminating any moving parts from the computer, the possibility of technical problems is greatly reduced. This is in addition to the silent operation and the low-power footprint gained by using a fanless system.

A rugged computer like the Boxer-6641 is made for harsh outdoor environments. Kiosks, for example, are placed in uncovered spaces, where the machine is buffeted with dust and hot winds. Very few systems are durable enough to operate in such conditions.

Surveillance networks are another such application. The computers processing the multiple video feeds are often installed into small recesses in outdoor locations, where the heat levels are higher than normal. Only fanless rugged PCs can be deployed safely for these tasks.

The Boxer-6641 is designed to handle moisture-laden environments with ease. The computer can function properly even in 95% humidity, which takes care of anything less than a proper downpour.

This means that you can use this embedded computer even in coastal areas without any issues. It can even be used to power smart city installations like traffic lights without needing any special protective structures.

Industrial setups are not very conducive to the integration of integrated computers. The machines generate constant vibrations, which can destabilize an embedded computer over time and even break it.

The Boxer-6641, however, is rated for vibration resistance. As a result, it can be integrated directly into industrial workspaces without any special modifications. Better yet, its fanless cooling ensures that it can keep itself functioning in warm surroundings usually found around industrial machinery.

Computers, by their very nature, are delicate machines. Its components can operate only in an optimum range of temperature and humidity, which makes commercial deployments difficult. Be it an industrial setup with vibrating machines or an outdoor kiosk exposed to the elements, a normal PC cannot be expected to work in these conditions.

But the Boxer-6641 has been designed for these scenarios. Thanks to its fanless cooling system and durable construction, the computer can power commercial applications in the harshest of environments without any drop in performance.