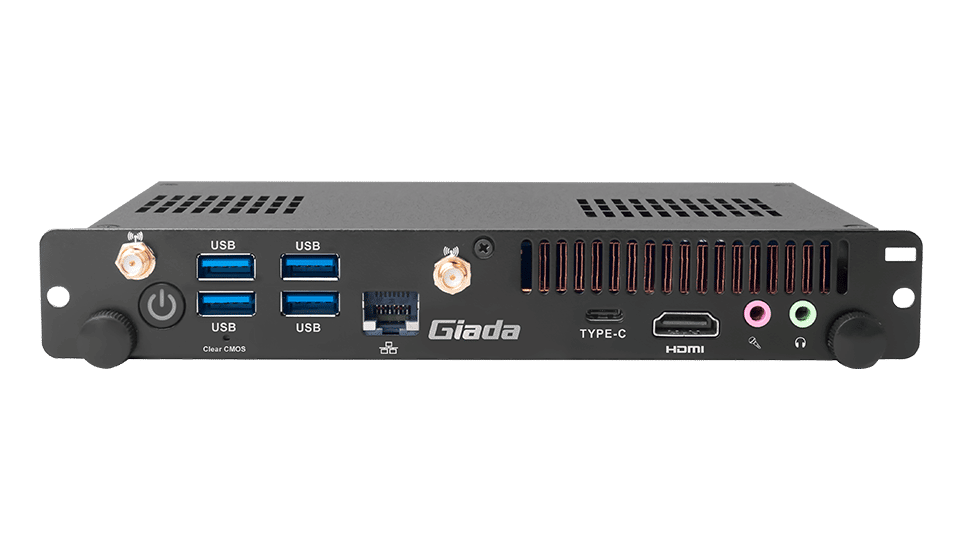 The problem with displays is the sheer variety of standards in use. HDMI, DVI, VGA – there are a number of technologies in use, and finding a system that works with everything can be difficult.

And that’s before going into things like graphics and ultra-wide display support. Whether you want to deploy a digital signage system, smart kiosk, or interactive whiteboard, you need a standardized system that works right out of the box.

What Is Open Pluggable System (OPS)?

OPS is a standard developed by Intel to ensure easy deployment of display solutions. It standardizes the system architecture between displays and media players, letting you “plug in” a display to any OPS computer.

OPS defines a standard layout for both the pluggable module in the embedded PC and the docking board in a display panel. The idea is to reduce the inconsistencies present between different types of displays and media players, giving a level playing field.

Not only does this make it easier to manufacture the said products, but it also makes it easier to replace a faulty system as the components are interchangeable. You don’t even have to ditch the whole unit – the pluggable module can be replaced separately.

Before OPS, manufacturers had to produce components and boards for different systems separately. OPS allows for a standardized architecture to be mass produced, reducing per unit cost.

The lower cost also reflects in display units. The standardized docking board improves compatibility irrespective of the display technology used, allowing businesses to choose a panel that best fits their budget.

Product lifecycles can be complicated. A media player device is assembled from multiple components, each with its own lifecycle. Some of these components often reach their End-of-Life (EOL) state sooner than others.

This is why the OPS standard, by its very design, takes a modular approach. This makes it possible to switch out individual subsystems without messing with the whole setup.

Digital signage systems are getting more sophisticated these days. Instead of just displaying pre-set programming, some systems are taking advantage of AI algorithms to better target the audience.

Such advanced applications require more powerful Intel i7 or i5 processors, instead of the usual Celeron. OPS computers are powered by these latest processors, along with sufficient memory to handle complex graphics computations with ease.
Applications of OPS

Digital signage is the most obvious use case of an OPS. These signboards are used virtually everywhere – restaurants, schools, public places, retail stores – for disseminating information and advertising.

On the surface, this looks like a very straightforward application. After all, you can just plug a display into any computer and call it a day, right? Wrong.

Digital signage must operate non-stop for long hours, and usually in the middle of a bustling crowd. Better yet, some signboards are used for interactive purposes as well, requiring even better processing power.

This is why a good OPS computer is an essential component for digital signage systems, no matter how simply you want to keep it.

An interactive whiteboard is basically just a display that can be interacted with, either through a specialized stylus or a touch screen interface. Of course, the display needs to be powered by a powerful OPS computer.

The advantages of an interactive whiteboard are obvious. Any work on the screen is automatically digitized and saved, allowing for the content to be easily shared. Then there is the cleanliness factor, as no ink needs to be cleaned up anymore.

Digital signage is usually deployed for advertising, but that isn’t the only use of an interactive display. Smart Kiosks can be set up in public places to autonomously provide essential information and services.

OPS computers are perfect for these smart kiosks, as they are compatible with all types of displays out-of-the-box. This makes a smart kiosk easy to set up and configure, allowing for quick deployment.

Do You Need an OPS?

Advanced display systems are crucial in all kinds of scenarios, from education to advertising. And the best way to power these displays is an Open Pluggable System.

You are already guaranteed to get compatibility and easy replacement with every OPS, but there are some other things to look out for. Display applications like smart kiosks and interactive whiteboards require a powerful processor to work smoothly.

At Global American, you can order Open Pluggable Systems based on the latest Intel Core processors. Giada’s OPS PC610, for example, is powered by a 10/11th gen i5 processor, handily taking care of even the most advanced digital signboard applications.